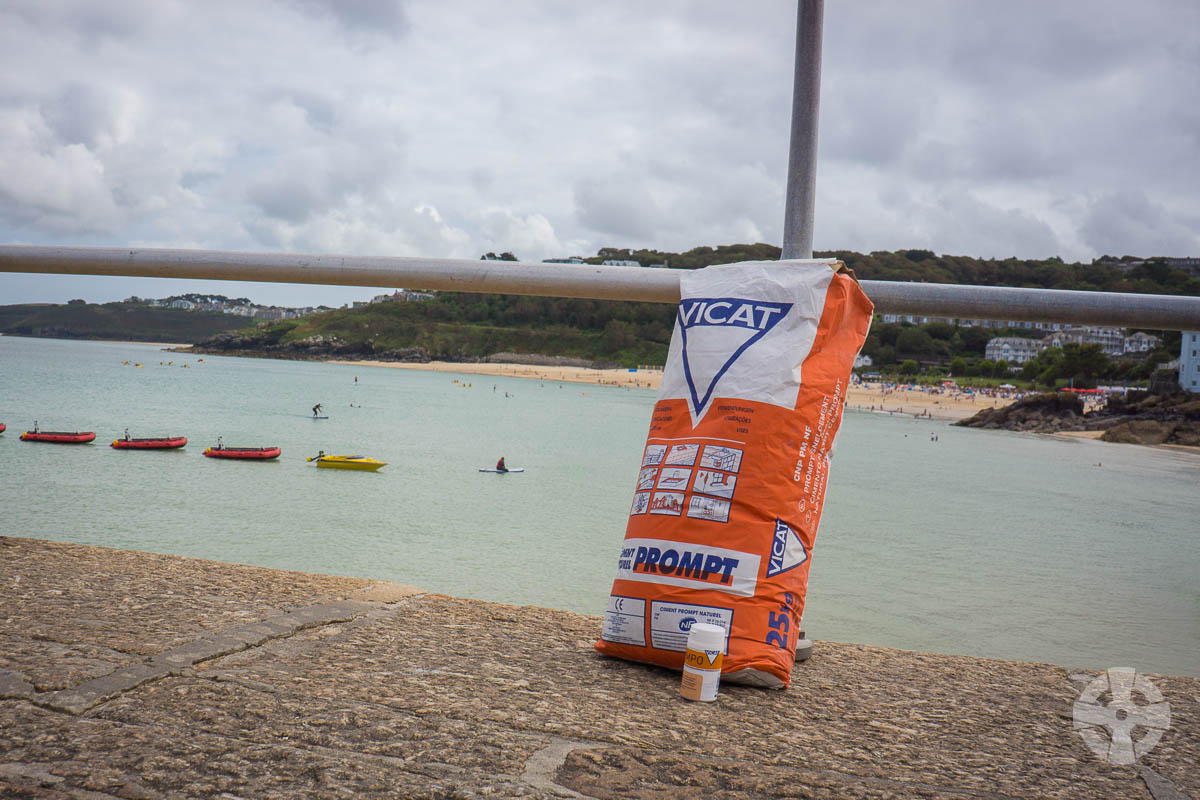 This fast setting waterproof cement is so versatile that it is constantly finding new uses throughout New build and Restoration Projects. Using the addition of measured amounts of Tempo Retardant, it’s setting time can be controlled from as little as 90 seconds.

Prompt is a unique binder produced by the Vicat Company at their Voreppe works very close to the French alpine city of Grenoble. The Vicat Company was established in 1853 by Joseph Vicat (1821-1902) the son of Louis Vicat (1786-1861) a French military engineer who is credited for his pioneering work with artificial cements. The Vicat Company is the third largest cement producer in France and now the only manufacturer of Natural Cement sold as Prompt, a name synonymous with its unique properties, as Hoover is for vacuum cleaners.

Prompt is an entirely natural cement, produced from a single geological layer of Argillaceous (clayey) limestone, a sedimentary rock formed during the formation of the Alps. It is mined then fired at the same relatively low temperature as that for lime production, 800 -1200º C and then finely ground; it contains no other additives whatsoever. Whilst fully compatible with other types of lime binder Prompt Natural Cement cannot be referred to as a lime binder as it contains no free lime Ca(OH)2 however its primary uniqueness comes from the rapid set that Prompt exhibits, which can be controlled with the addition of Tempo (citric acid) which can delay the set in a Prompt mortar by 10 to 30 minutes depending on the ambient temperature at the time.

Where to use Quick Setting ‘Prompt Cement’

Prompt Natural Cement can be used in countless applications on its own, with sand or gauged with traditional lime mortars and plasters, lime putty or NHL mixes, along with many other applications in building conservation where accelerating or achieving a rapid set would be beneficial. Prompt is the only commercially available and appropriate material for repairing Roman Cement applications. The following is but a small selection for a myriad of uses for Prompt.

Some Applications for ‘Prompt Cement’

Accelerated building operations, emergency repairs, rebuilding of openings, quick build up of any type of masonry, quick or rapid (use of Tempo), very useful for fitting doors and windows. Underpinning operations, with a higher compressive strength than NHL based lime concrete or mortars, and with a much quicker set allowing for safer and improved productivity, all without the need for OPC. Casting ring beams. Roman Cement repairs. Tanking works where appropriate i.e. a 10 mm base coat render mixed at 1:1 in vulnerable locations such as window reveals to mitigate damp ingress at such a location. Water stopping in basements or drainage works. Concrete repairs, high alkalinity helps protect rebar from corrosion. Storage bunds especially sewerage or other areas where aggressive chemical leachates would attack repair mortars. Underwater engineering where divers can carry out instant repairs using neat prompt. Harbour works within the tidal zone, Prompt has been used in saltwater marine environments for more than 150 years.

Web orders are currently closed in light of the current situation. We will update you when this changes. In the meantime call 01208 79779 if you have any questions. Dismiss