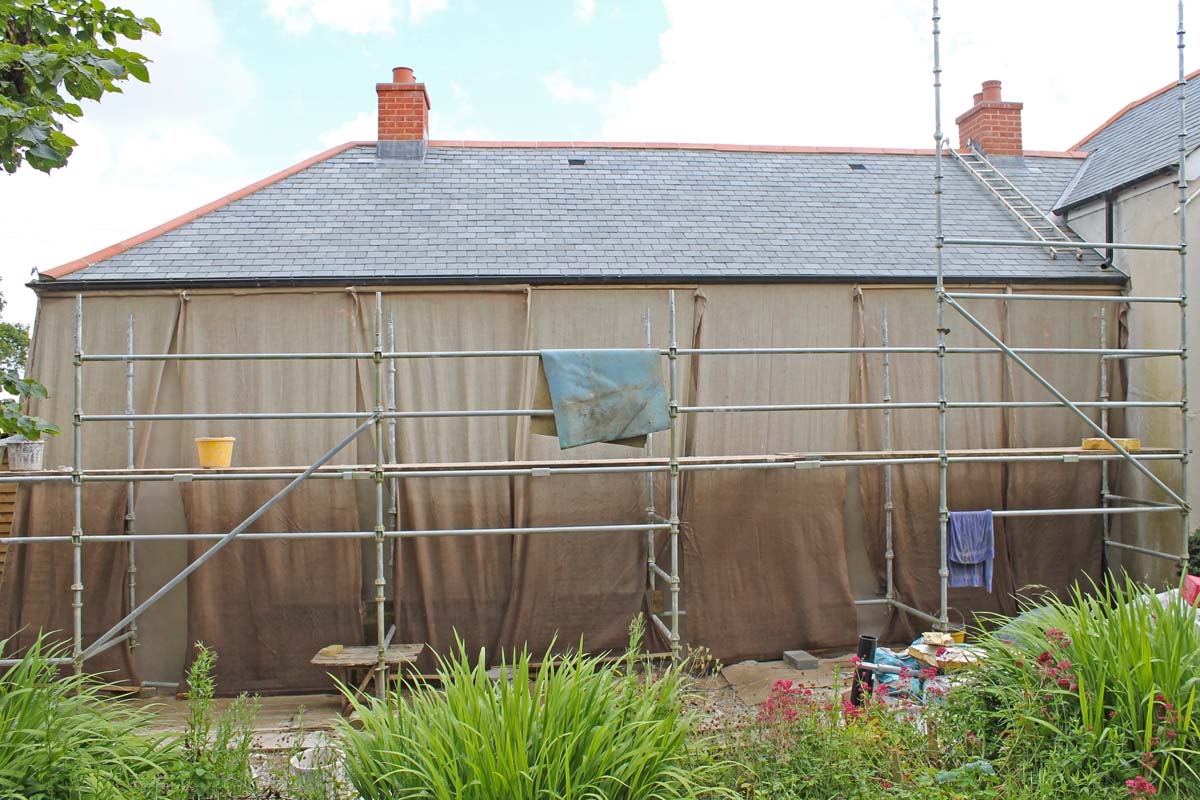 Curing is the process of keeping a mortar or render under a specific environmental condition until the chemical set (referred to as hydration) is sufficient to withstand the environment into which the mortar has been placed. Lime binders are generally weaker than cements taking longer to acquire their strength and hardness, leaving them potentially more vulnerable for a longer period than cement equivalents, and curing them once placed is simply regarded as best practice.

Good curing is typically considered to be that of providing a humid environment stimulating full hydration of the lime binder, providing strength development along with other quality benefits to be had from using lime. Conversely, and the most common cause of failure in our experience, is allowing a mortar/render to dry out too quickly, impeding the chemical process for hydration, stressing the mortar resulting in cracking, especially to renders.

Standard practice for protecting lime renders is with Hessian sheeting draped over the subject area in relatively close proximity to the render. This should be left in place for at least a week and while this is a standard requirement for any kind of rendering it’s one that is regrettably seldom practiced.

Cornish Lime stock three grades of hessian; 229, 273 & 366 gsm (grammes per m2) where the weight is relevant to the weave and amount of fabric used per square metre. The most commonly used for curing is the 229 & 273 gsm, the heavier fabric is more generally used for frost protection.

Where a render is allowed to dry out too quickly hydration and carbonation of the binder is inhibited, resulting in drying shrinkage. There are two principle types of drying problems both of which will be manifested as cracks. The first, plastic shrinkage is the consequence of the rapid evaporation of mixing water from the mix (while in its plastic state). This leads to increased tensile stresses at a time when it has not gained sufficient strength. Plastic shrinkage cracks will be manifested in the first 48 hours.

The second, drying shrinkage is from the effects of climatic conditions such as wind, high temperatures or exposure to strong sunlight (compounded during times of low humidity). Cracking from drying shrinkage tend to take that much longer to manifest but the outcome is much the same. Another consequence of rapid drying is that the mortar may become friable.

The consequences of too much water in a mix can compound the plastic shrinkage, which as previously mentioned is likely to be manifested in the first few days following application. Water in a mix takes up volume and is given up during the hydration process.

3, Moving On Too Quickly

The consequences of applying subsequent coats of render coats too soon onto the previous coat may result in stress cracking as a result of unequal contraction between the two layers (differential drying). We advise that the backing coat should be allowed to achieve a sufficient set prior to applying additional coats.

The application of excessively thick top coats can result in stress fracturing in the coat as a result of unequal compaction when finishing the render coat. The purpose of floating (rubbing up) is primarily decorative; however, it performs a technical function, closing the surface in this manner helps reduce the ingress of water. Also where a top coat is too thick it will be extremely difficult, often impossible, to compress the whole thickness to an adequate let alone an even level.

As well as supplying Hessian and a range of ties etc. Cornish Lime also supply a Wintermix product as part of our Cornerstone range. Please contact us for further information on this product or further advice on curing lime mortars and renders.

For high suction backgrounds especially we advise the addition of a proprietary polypropylene or fiberglass reinforcing fibres added to the mix as an aid to control shrinkage cracking in the base coats.